24 people attended, with some new faces amongst the crowd. We welcomed club member Paul Leicester and his friends from Matlock and Chesterfield IAM groups.

This month, our special guest speaker was Mr Ian Windmill from Derbyshire Casualty Reduction Enforcement Support Team (CREST). Following on from a 32-year police career, Ian now supervises all camera operations throughout our county. Below you can read the key points that were raised during the evening. 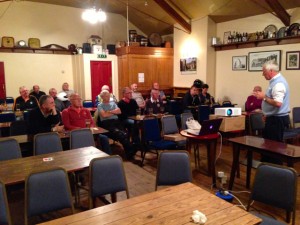 There are 117 fixed camera sites throughout Derbyshire. There are 14 cameras that can be fitted in to those 117 boxes. We do still use fixed camera boxes to enforce the speed limit

Derbyshire has two types of fixed cameras, Gatso and Truvelo. Truvelo cameras are being phased out
Education is important, but  Enforcement is the only way to really affect drivers/riders behaviour
We do covertly measure traffic speeds and vehicle types to find the worst 60 roads, we then deploy our camera teams to those 60 sites
We have 3 mobile vans and 5 staff to operate them
The operator must form the opinion that the vehicle is speeding before operating the laser on that vehicle. The lasers are in passive mode, so they don’t capture every speeding vehicle
Camera kit was developed by NASA for the space shuttle program. It is calibrated and very accurate
Laser jammers are illegal and we do prosecute
We have a motorcycle with a laser camera that goes where the vans can’t operate
Each fatality costs the UK £2,000,000
Last year there were 1,800 fatalities on UK roads
An average of 7-people die per day on UK roads
425 young soldiers died in Afghanistan over 13-years. On the UK roads, that number takes just 100-days
Once you have been seen speeding, the system is automated. We check the Police National Computer for the registers keeper
The registered keeper must inform who the driver was at the time of the offence. Mandatory 6-points for not giving the name of the driver
If you are filmed at between 37-41mph we offer you a speed awareness course. Course must be completed within 4-months of the offence
£100 and 3 points for speeding
Double any speed limit and you will be banned by the magistrate as this is compulsory
Jan-Aug 2013, there were 17 fatalities in Derbyshire
Jan – Aug 2014 there have been 28 fatalities in our county
9 fatalities on bikes so far in 2014. 8 fatal bike deaths in 2014 are single vehicle accidents, i.e. no other vehicle was involved in the fatal accident
Those 9 deaths make up 33% of all fatalities. Motorcycles make up only 1% of all traffic
Operation Focus is an Op in North West Derbyshire and along main routes. High profile patrols in marked vehicles. Targeted at sports bike riders but also any motorcyclists in general because they are involved in so many accidents. The Op runs from Easter to end of September
The infamous Cat and Fiddle route is now amongst the safest roads in Europe, due to average speed camera system. The route is administered entirely by Cheshire police
If there is a speed problem along a road but no collision history, then the camera teams will not deploy there
There are no red light cameras in Derbyshire, and there will not be any in the future.
← Previous Post
Next Post →
Derbyshire Advanced Motorcyclists © 2014-2019