Sunday 25 May 2014 saw my very first group ride as ride leader, and boy what a trip it was! The day started in the damp drizzle at Donington services, but as soon as we headed south the weather quickly dried up and we enjoyed a day of almost unbroken sunshine. 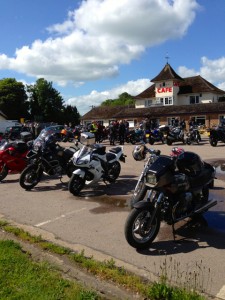 Our first stop was at Jack’s Hill Motorcycle and Truck stop on the A5 at Towcester. There were plenty of other bikes there to enjoy with a mug of tea in the warm sunshine.

We then devoured the sensational A413 and A355 roads that link Towcester and Beaconsfield, before a quick hop on to the M40/A40 in to London. These two roads are a wonderful blend of sweeping bends, gentle undulations and some very majestic villages. 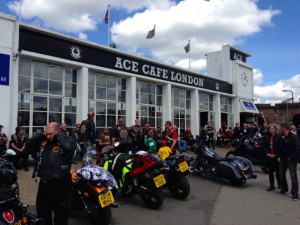 Upon arrival at the Ace Cafe the place was packed full of bikes from The Royal British Legion Rider’s Branch, so the stewards marshalled us away and on to the footpath opposite. There was a really exciting buzz about the place as everyone enjoyed the sunshine and the bikes on show. Ironically, there was also a bus-full of Chelsea Pensioners there too! 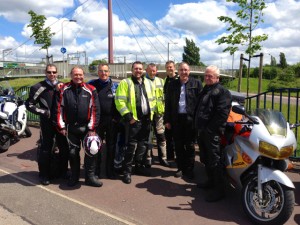 To this day I don’t know why we didn’t have our group photo taken with the Ace Cafe in the background!

After lunch and a quick look around at the bikes, we split in to two groups as some decided to stay at the Ace Cafe and listen to the live bands playing their rock music, whilst others wanted to visit the nearby London Motorcycle museum in Greenford. 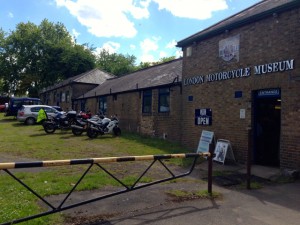 Getting to the museum proved to be quite a challenge, even for a Sunday afternoon! Drivers at the very heavily congested Hangar Lane junction seemed to ignore the red traffic lights! So, a bit of careful filtering was required in order to make any sort of progress through the jam, and it is with great sadness that at this stage in the ride we became separated with one rider from our group, who ultimately made his own way home. 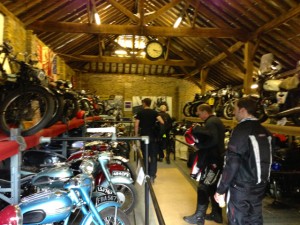 There are a lot of very interesting bikes in the museum, including an old Enfiled that was ridden from the Arctic all the way down the Americas to Antarctica to raise money for Cancer Research. The £85,000 he raised in the 6-months plus one day was quite some achievement for old “Iron Arse”. 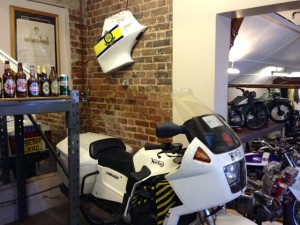 There are plenty of Velocette, BSA and Triumph motorcycles to see; there was even an old Norton Commander from my old army outfit, the Royal Military Police!

For my first experience as a ride leader, it was a wonderful feeling to know that I had planned and delivered a day out such as this and, except for the one hiccup, it was a success. Everybody rode very well and remained alert throughout what was quite a long day of around 300 miles. The routes provided a great mix of different styles of roads, so there was something to please and challenge everyone, and the weather was relatively kind to us.

I am now busy planning my next group ride, which will be a trip in to mid-Wales to visit Devil’s Bridge in Ceredigion.